Principles and Applications of Common Electrical Components for Cranes

Circuit breakers, contactors, intermediate relays, thermal relays, pushbuttons, indicator lights, universal transfer switches and limit switches are the eight most common components in electrical control circuits. The principles and applications of commonly used electrical components are described here. The role of the electrical circuit to grasp the normal operation of these components.

Low-voltage circuit breakers, also known as automatic air switches, can be manually switched, and can also be used to distribute electrical energy, infrequently start asynchronous motors, and protect power lines, motors, etc. when they are severely overloaded, short-circuited, or undervoltage faulted. Automatically cut off the circuit.

The contactor consists of two parts: the electromagnetic mechanism and the contact system. The most common contactor coil voltages are AC220V, AC380V and DC220V.

The contactor text symbol is: KM

A thermal relay is a relay that operates in reverse time using the principle of thermal effects produced by current passing through the element.

The principle of the intermediate relay is a relay that turns one input signal into multiple output signals or amplifies the signal (ie, increases the capacity of the relay contacts). Its essence is voltage relay, but it has more contacts (up to 8 pairs), contact capacity up to 5-10A, and sensitive movement. 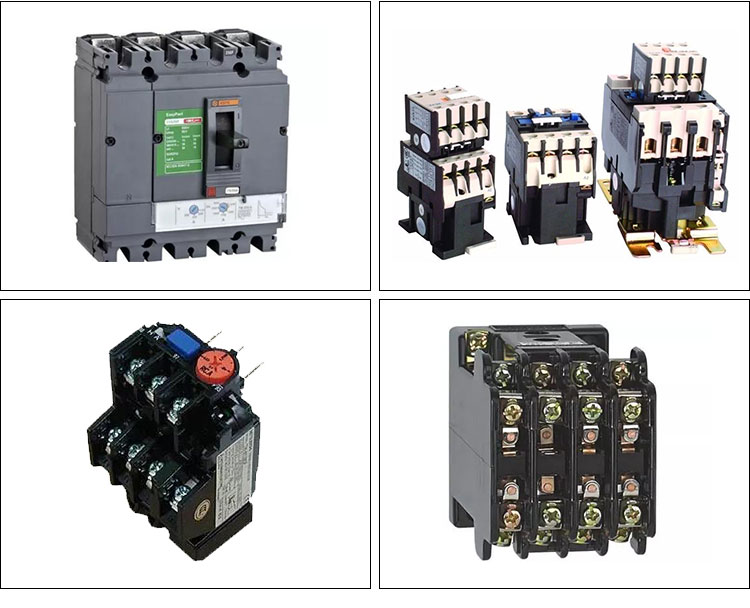